Many people think of yoga as a pursuit for the young – picturing lithe elastic bodies twisting into seemingly impossible configurations. But yoga is not just about strengthening muscles and increasing flexibility. In fact, asana practice (i.e. the physical movements and poses) is only preparation for the harder, inner work of yoga.

One of the consistent themes in yoga is “opposition.” For example, in asana, while one part of your body is moving in one direction, another part is moving in the opposite direction, creating a feeling of length and space.  Opposition can apply not just to physical movement, but also to the breath, to regulation of bodily functions, to emotions, and to mental attitudes. There is a concept in yoga philosophy called pratipaksha bhavana – loosely translated as “cultivating the opposite.” In this first of a series of posts about the benefits of yoga for older people, I’d like to offer a practice that applies this concept of pratipaksha bhavana for menopause.

What comes to mind when you think of menopause? If you’re currently in menopause, or have already been through it, what is/was your experience? Can you imagine an opposite for each aspect of menopause? Let’s start with that butt of all older women jokes, hot flashes.

Medical researchers currently think that hormonal changes (loss of estrogen, for example) disrupt the circuitry that controls body temperature, creating those ever popular hot flashes and night sweats. To help bring those wayward temperature swings under control, aerobic exercise, and/or a stronger yoga morning practice, focusing on breath (breath is a great physiological regulator), may help. Think cool! There is a wonderful breathing technique for cultivating coolness called sitali. To practice this technique, as you inhale, make an “O” with your lips, curl your tongue, and lift your chin as you scoop the air into your tongue (if you can’t curl your tongue – and not everyone can! – just stick your tongue out). As you exhale, close your mouth, breathe through your nose, and drop your chin.

During menopause, all those reproductive organs stop functioning, but they’re still there, taking up space in your body. Kind of like your kid’s stuffed animals that he didn’t want to take with him but you can’t bear (no pun intended) to throw out. How do you feel carrying around those body parts that are past their expiration date?  Cultivate vitality! To decrease stagnation in that area of your body, increasing circulation in the pelvic and groin area, abdominal breathing can be helpful: inhale with a focus on expanding around the navel, then the pubic bone, then the pelvic floor, and exhale contracting from the pelvic floor upwards.

Another thing that is common during menopause is difficulty with mental focus. Perhaps the brain has too much to handle, what with all those hormone-induced changes. Cultivate focus! Incorporate contralateral movement coordinated with breath into your yoga practice – for example, sweeping the right arm overhead as you raise the left leg.

The practice below shows examples of these techniques.

I will be holding a 5-week class series focusing on women’s issues, including menopause, starting on April 24 at WESTMED in Purchase. 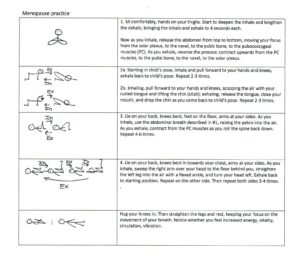